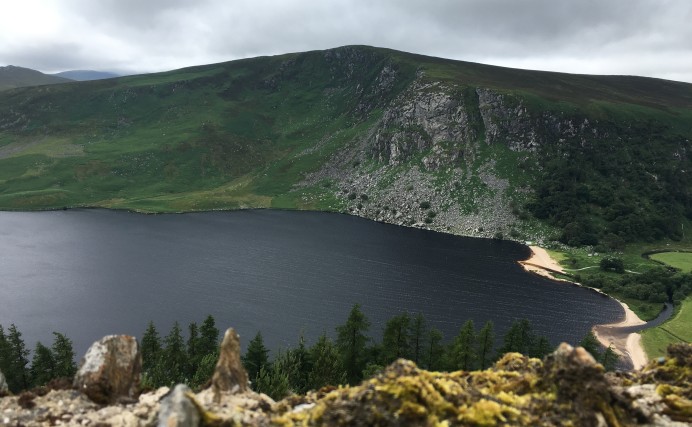 09h00 Depart from Dublin – you will be travelling South for your Full Day Wicklow tour, otherwise known as ‘The Garden of Ireland’.

Powerscourt Gardens are the first stop and are one of the world’s most spectacular gardens, they lie 15 miles south of Dublin at the foothills of the Wicklow mountains. The house and gardens were commissioned in the 1730’s by Richard Wingfield, the first Viscount Powerscourt, however, the gardens fell into decline over the years.

The ornamental gardens that you see today were completed in 1875 by the 7th Viscount, who collected urns, wrought iron gates and statues from his travels in Europe.

The gardens are made up of a sublime blend of formal gardens, sweeping terraces, statuary and ornamental lakes with secret hollows and rambling walks and over 200 varieties of trees and shrubs.

The 18th Century Palladian House was gutted by fire in 1974 but it has been restored and now incorporates an innovative shopping experience, terrace café and house exhibition.

Its incomparable beauty makes it a favourite for film locations, recently featured in the sequel to ‘Gone with the Wind’ with Timothy Dalton and ‘Far and Away’ with Tom Cruise.

At 11h30 we depart Powerscourt Gardents travelling to Glendalough –  ‘Valley of the two lakes’, the valley lies in the heart of the County Wicklow Mountains. This monastic site was established in the 6th Century and flourished for 600 years despite Viking raids.

St. Kevin founded the monastery here at Glendalough, he was a descendant of the royal house of Leinster but chose to live as a hermit in this peaceful place. There are many local legends about the saint, one was he chose this remote spot because his good looks made him a source of temptation, another is that he was pursued by one particularly persistent lady, he resisted by throwing her into the lake !

This atmospheric valley houses buildings dating from the 8th Century including a Round Tower and Cathedral. Woodland walks surround the lakes where you can wander through this tranquil valley.

In the afternoon, you will depart Glendalough, travelling further south through the hills and valleys to the Meeting of the Waters, a picturesque little village, situated where the two rivers, the Avonmore and the Avonbeg meet.

Passing through the Vale of Avoca, you can easily see the signs of the local mining tradition, with the remnants of old chimney stacks and engine houses scattered around. Copper and sulphur were mined here from the Bronze age to the 1980’s.

A couple of miles further on is the village of Avoca. The BBC TV series ‘Ballykissangel’ was filmed here and you can see the church and the pub ‘Fitzgeralds’ that played a large part of the series. The village is also home to the Avoca Woollen Mills, you can see the weavers at work on their looms in the factory and the produce is available for purchase in the nearby shop.

We will return to Dublin by the direct route N11 so you are back to your accommodation by approx. 17h30.

You can follow any responses to this entry through the RSS 2.0 feed.